REPORT ON GARDEN VISIT TO ANDREWS CORNER AND STONE LANE

Four members ignored the weather forecast and decided to take part in this visit which has been planned to take place last year but had had to be cancelled due to heavy rain and strong winds. Plus ca change...

Andrews Corner is a wonderful garden situated on North Dartmoor, owned by Robin and Edwina Hill who have lived there for over 40 years. Edwina baked some delicious homemade biscuits and Robin gave us a tour of the garden.  He is a licensed dormouse handler and has boxes dotted around the garden, including 50 boxes situated in the valley which form part of a dormice project.

The garden is planted with many rare species, including acers, both small and mature varieties. There are Japanese maple and birch trees and an unusual hydrangea which has chocolate coloured leaves.  Andrews Corner is divided into three levels, the taller trees protecting more vulnerable species from the weather.  The garden slopes down to the bottom with a breathtaking view of Dartmoor showing a steep climb up to Cosdon Hill, and the River Taw runs along the valley.  During our visit it did rain heavily but finally the sun came out and we enjoyed the views across the Moor.

We returned to Belstone Village for lunch at the Tors Inn and again enjoyed stunning views of North Dartmoor.

Stone Lane Garden was our next stop, about 6 miles on the Chagford Road, located down a very narrow lane - luckily we didn't meet a tractor! We parked in a field at the top and followed the path down through mature alder and birch trees.  A kind volunteer met us and we were left to explore the 5 acre woodland and water garden.  Kenneth and June Ashburner created this intriguing space in the early 1970s.  He planted the trees from seeds he had grown gathered on his travels.  In 1992 June decided that the garden would be an ideal place for an exhibition of open air sculptures and 'The Mythic Garden' was born. 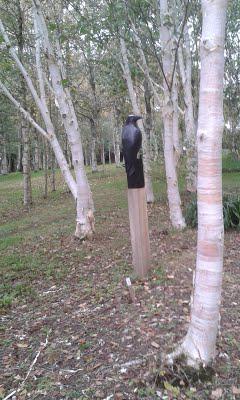 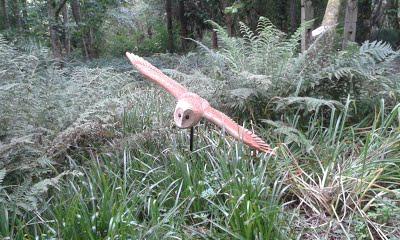 On our outing westwards we were joined by some members of our u3a photography group. 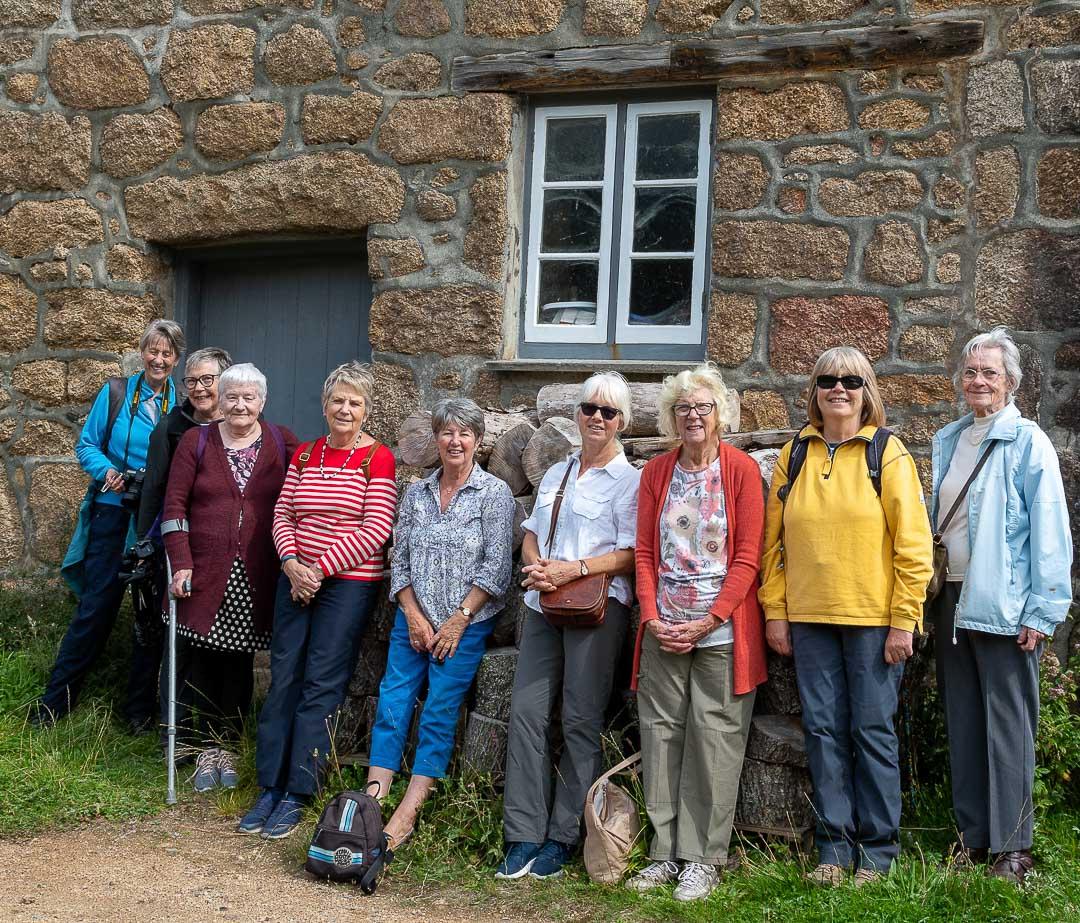 Travelling in several cars,  our spirits were dampened by heavy rainfall, but by the time we reached Hayle for a quick coffee stop the rain had also stopped and a sunny day ensued.

We reached Penberth gardens just after 11am and met the nursery manager whom we had previously spoken to at Tregrahan Rare Plant Fair earlier this year.  He advised a route through the garden which entailed a climb up the steep side of this sheltered valley on rocky paths.

We saw many unusual trees and plants associated with a warmer climate, the sky now nearly as bright as the agapanthus!

We then followed a gentle path alongside a stream until we came to  pretty cottages and the sea at Penberth Cove - and some keen photographers at work!  There is a massive capstan here, a large stone slipway and stepping stones over the river, very appealing so not surprising that parts of the recent Poldark television drama was filmed here.  However, all 11 members of the group were disappointed that Aiden Turner did not make an appearance!

So next, inevitably, round the corner for a rest and super lunch at The Logan Rock, Treen.

Turning towards home our next venue was at Longrock, the National Dahlia Collection at Varfell Farm.   A total contrast here, an open field of vivid colour.   Hundreds of named varieties, some pastels but mostly vibrant contrasts competing for attention, but not an earwig in sight!   We saw many different forms of flowers, some dual colours and plants of varied size - something to suit any garden.   There was even a large shrub, Dahlia Imperialis.

Although our own gardens don't resemble either of these venues,  we had learnt a lot and once again came home inspired. 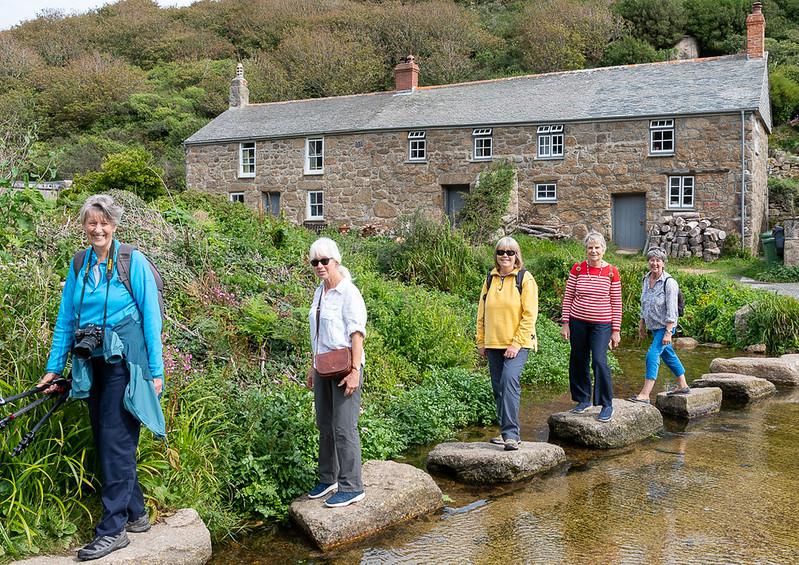 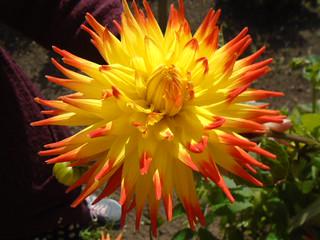 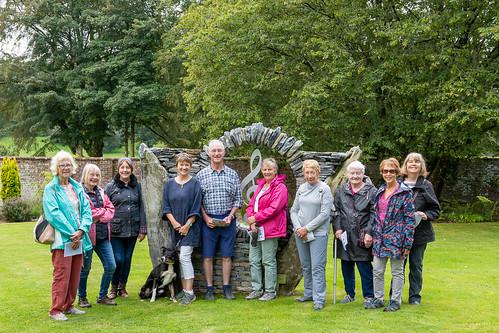 In August, we always visit a garden not too far away from Lostwithiel as we do not want to fight our way through the holiday traffic.  This year, we visited Gardens Cottage, a new garden in the making in Prideaux which opened for the NGS for the first time last year and Annie had recommended.  A big THANK YOU to Janet Dutton who did the research for this visit early in the year when she was still in good health.  The nine members who put their faith in an optimistic weather forecast were rewarded with a visit to a very pretty garden which we were able to explore under lovely sunshine.

When the owners, Sue and Roger, arrived at the end of 2014, the land was a mixture of mown meadow and rough woodland.   Their vision was to create a country garden which is sympathetic to its surrounding landscape, has year-round interest, lots of colour and simply feels good to be in.    They have certainly achieved all this.  When we were having afternoon tea at the end of the day by the terraces and rockery, none of us wanted to leave and we could have stayed for supper, had this been on offer!

This garden looks much older than it is, thanks to its mature trees and the beautiful red brick wall which separates it from Prideaux House.  In this wall, you can see a gate which is the shortcut that the gardener who lived in the property used to take to get to his job at “the big house”.

As soon as we walked into the garden, we saw the most recent additions to the garden:  the dry-stone music sculpture, complete with a treble clef as well as a peace cairn built by Roger, an idea copied from Pinsla garden.

There are many areas to explore in this beautiful garden and this is what we did in pairs and groups: 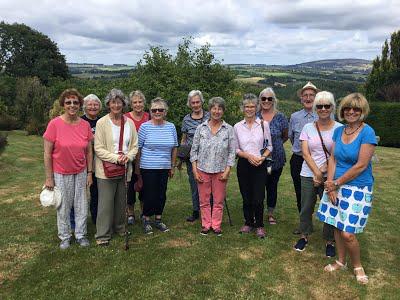 Thirteen members of the group made their way to Ken Caro for a visit organised by Gill Forster and Carol Baker - a big THANK YOU to them both.

Ken Caro, near St Ive, Liskeard, is a connoisseurs' 10- acre garden full of interest all year round.  There are lily ponds, panoramic views (see our group photos) , plenty of seating, picnic area etc.  In July, the vast collection of day lilies are in full bloom.  There is also a woodland walk which has one of the largest beech trees.  There is a good collection of yellow magnolias, herbaceous plants as well as a large collection of hydrangeas. 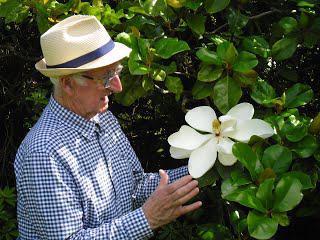 Mr Willcock gave us an introductory talk before we set off in pairs and groups around the garden.  Mrs Willcock made tea which we had in the summer house to accompany the cakes and sandwiches generously provided by Gill Forster.

It was an enjoyable afternoon spent in a garden which is not far from Lostwithiel but which so few of us had been to before.