For info about Corona Virus and how it is affecting Lostwithiel click here   --------  National Office Covid-19 News and things to do available via this link.

I have some sad news, our blue tit nest is failing, we have only 2 surviving chicks and I think it is likely that we will lose them, we think possibly due to lack of suitable food or a mite infestation.  I guess where nature is concerned you can never be sure of the outcome.  So sadly there will be no more footage

We know of a web site which has some wonderful web cams on wildlife, including a camera on a thriving blue tit nest, so everyone can continue their wildlife watching. Please click here at  WILDLIFE KATE .

As you can see from the footage the chicks' grow at an astounding rate and their feathers are now beginning to show, their eyes will open during the next few days and, if all goes well, they should fledge within a three week period from hatching.  As the nesting period progresses both adult birds become increasingly "tatty" in their appearance and will go into a full moult after the chicks have fledged.​

We have exciting news this week - the Blue tits' eggs started to hatch on Saturday morning, the first two in quick succession, a further four hatched during the day leaving one remaining egg.  The first two clips show two newly hatched chicks in the nest and you will see they are extremely floppy, but despite this within an hour they manage to hold their head up for just long enough to take food and them slump back into the nest. On the footage you can hear the parent birds chirping to announce their arrival with food, this is the trigger for the chicks to lift their heads in readiness.  You will also see that sometimes the parent birds will try many mouths with an insect until they are satisfied the chick can swallow it, on occasion they realise the food is too large and will eventually give up and eat it themselves. The chicks will be in the nest for up to 3 weeks and their growth is rapid they will quadruple in size during this time.  The camera footage can give a false impression of the actual size of both the chicks and adult birds, on average an adult bird weights just 11 grams.

The hen Blue tit starting brooding her eggs last Monday, the final egg total is seven and we think they will hatch this coming weekend. Interestingly she leaves the nest frequently to forage although the male bird is bring some food to her, notably on one occasion a large green caterpillar and we are hoping this is a good sign that food will be plentiful for the young when they hatch. 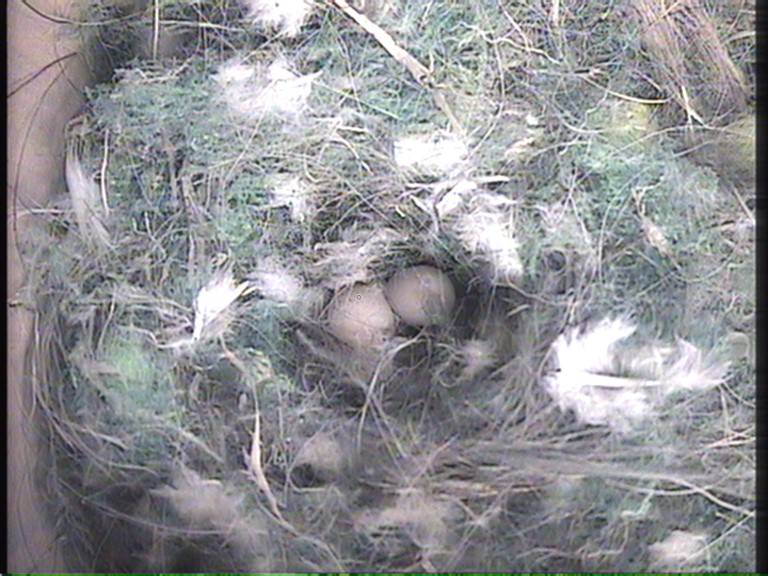 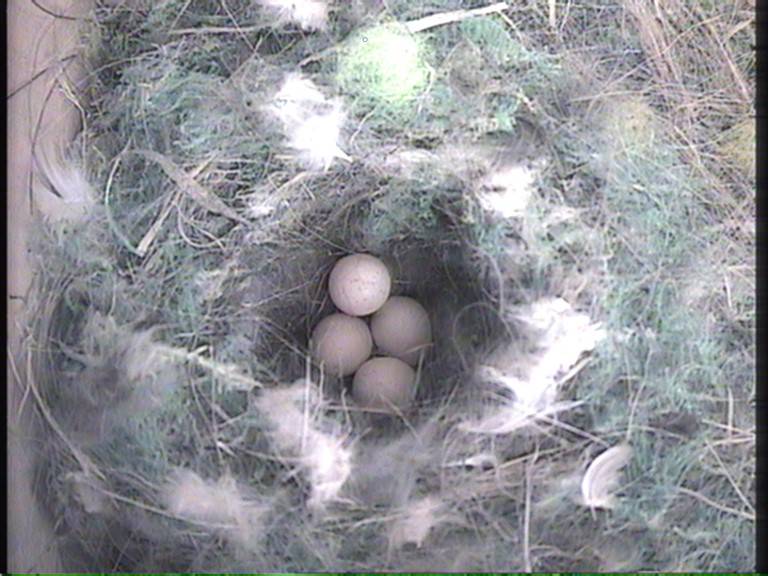 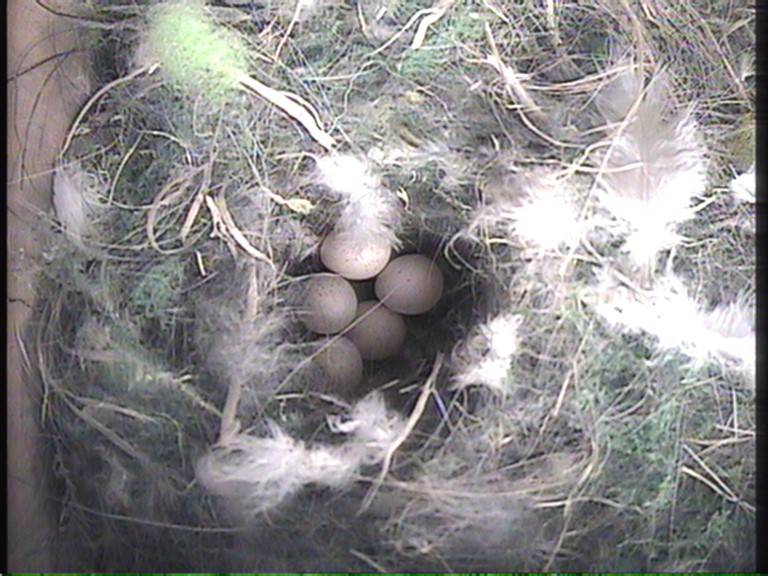 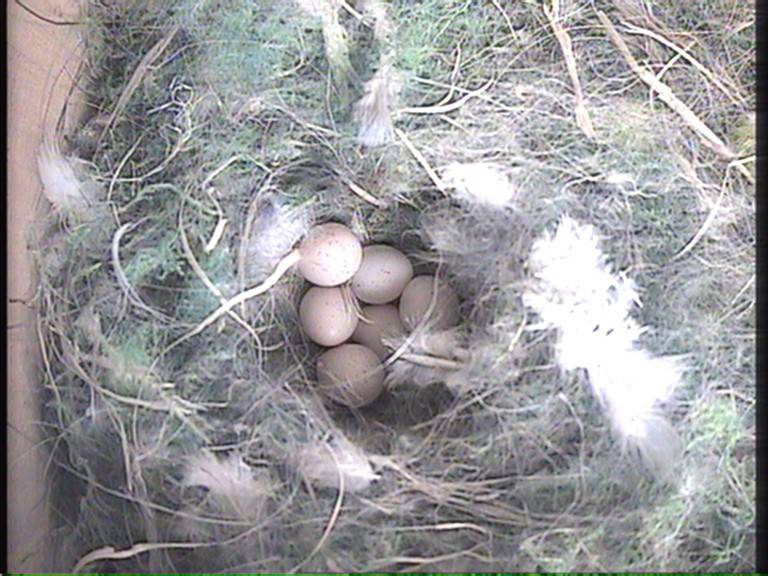 The Bluetit nest is now finished and being used by the female as a very comfortable roost each night, we hope she will start laying eggs this week, this usually occurs over night for 10 days or so. We will keep you posted on progress.

This footage shows a male and female on our lawn on Saturday night (the larger male is on the left), seeing two together is a sure sign it is the breeding season. Hedgehogs are extremely noisy during this time and on the footage you can just hear courtship snorting.

THIS WEEK'S UPDATE ON NEST BUILDING

Busy nest building. Everything has to be just right.

Nearly there - feathers coming in (and out) to line the nest

FROM JANE PERRISS AND PETER TANDY

For a number of years we have had a blue tit nest box in our garden, the box has a camera which has given us a privileged insight into the life of blue tits.  We are lucky that the box is used each year, with some successful.  Unfortunately last year the nest failed, we believe this was linked to the unseasonably cold and wet meaning that caterpillars were just not there for the chicks. We would like to show the progress of the nest over the coming months during the various stages this year.

Interestingly,  we have found each year our nest box is used from November onwards as a roost by a blue tit, especially rewarding because as the winter weather rages outside our blue tit is safely tucked up in the nest box​.  The blue tit remains using the box at night and in late March early April begins to bring nesting material in.  This is an extremely long process, initially the bird will bring material in and inexplicably take it out again, until they start building the earnest in early April.​​

The following information is an extract from  https://www.bto.org/understanding-birds/articles/blue-tit-diary​
"Blue Tits start searching for a safe, warm site to start building their nest in February. The location is important as they require a clear flight path to the nest's entrance hole and the site must be relatively inaccessible to predators.  The size of the nest box hole is important (c.25mm diameter) to keep more dominant species from ousting the nesting pair.​

Most blue tits begin building their nest in late March. This allows them to synchronise breeding so that the hatching of their chicks coincides with peak food availability - the tiny caterpillars that have also hatched to feast on fresh tree leaves.​

The female Blue Tit builds the nest alone with little or no help from the male. She takes moss will from garden lawns and forms it into a cup. The nest is complete when it is lined with soft feathers, fur or wool. Blue Tits can build a nest in a few days, but generally it takes them between one and two weeks.​Birds need to be in prime condition at the start of the breeding season. Placing bird food in the garden, particularly suet, peanuts and black sunflower seeds, provides a valuable source of nutrients and energy which can be used by females to produce eggs and keeps both parents in good condition so that they are able to supply enough food for their chicks.​"

It seems we have multiple hedgehogs in our group. Peter and Caroline, and Jane and Peter are recording footage of their respective hedgehogs. 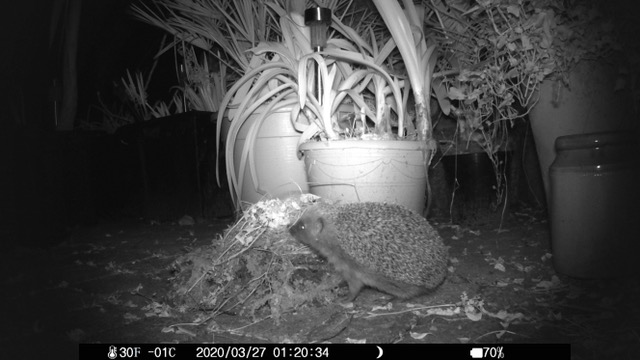 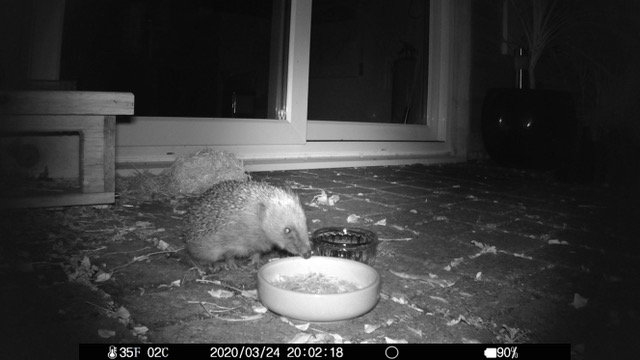 From Jane and Peter - We count ourselves extremely lucky that each year we have hedgehogs visiting our garden and this year so far we have seen three individuals.  To help them when they come out of hibernation we put dried cat food out each night under a wooden cloche, the entrance is hedgehog size to deter the local cats from getting a free meal and we also make sure there is fresh water available. ​
Our fencing and gates have hedgehog size holes in at ground level giving our hogs free access.  We also  provide 5 star accommodation in the form of a hibernation box (with bedding) which is used periodically.  We avoid using chemicals in the garden which means our shrubs and plants have to be robust to survive, but in return we can watch our hogs from the lounge window most nights which gives us great pleasure and we have the satisfaction of knowing that we are doing our bit to help them.​
A hedgehog's home range is surprisingly large around 10-20 hectares and it will roam an average of 2km on a single night, this increases to 3km for a male hedgehog searching for a female.​
On one or two occasion in late September/October we have seen young hedgehogs out during the day, this is a sign that they are in trouble and will not have enough time to put weight on for hibernation.  In these cases we take them to a rescue centre at Mawnan Smith where they are feed throughout the winter and we collect them (a much larger version) in the spring to be released into our garden.  ​
As you can tell we are huge fans of the humble hedgehog and do all we can to help them survive in the modern world.

The following advice given by the RSPCA on hedgehogs  ​https://www.rspb.org.uk/.../other-garden-wildlife/mammals/hedgehog​
Hedgehogs in the garden​Hedgehogs are a gardener's friend, as they eat snails, slugs and insects.​
Make a hedgehog a home​Leave areas of the garden 'wild', with piles of leaf litter and logs. These are an attractive nest as well as a home for the invertebrates (slugs, beetles) that hedgehogs like to eat.​
Making an artificial home can be as simple as placing a piece of board against a wall.​
Feeding hedgehogs​Food and fresh water will encourage hedgehogs to return. Leave out foods like tinned dog or cat food (not fish-based) and crushed dog or cat biscuits. Specialist hedgehog food is also recommended and can be bought from wildlife food suppliers.​Never feed hedgehogs milk as it can cause diarrhoea; instead provide plain, fresh water in a shallow bowl.​
Hedgehog-friendly gardening​Cover drains and holes and place bricks at the side of ponds to give hedgehogs an easy route out. Cover swimming pools overnight and when not in use.​Check for hedgehogs before using strimmers or mowers, particularly under hedges where animals may rest. Check compost heaps for nesting hogs before forking over.​Build bonfires as close to time of lighting as possible and check them thoroughly before lighting.​Remove sports or fruit netting when not in use to prevent hedgehogs becoming entangled, and getting injured.​Slug pellets can poison hedgehogs and should only be used as a last resort. Instead try using one of many "natural" alternatives, like sprinkling crushed eggshells or coffee grounds around the plants you need to protect. If you have to use pellets, place them under a slate which is inaccessible to hedgehogs.​
Hedgehog hibernation​Hedgehogs usually hibernate between November and mid March and animals must have enough fat reserves to survive hibernation. Making hedgehog homes in the garden and providing food will help hedgehogs.​Juvenile hedgehogs weighing less than 500 grams during late autumn will need help to survive the winter - download our factsheet caring for autumn juvenile hedgehogs (PDF 416KB) for advice.​
Did you know?​As many as 10 different hedgehogs may visit a garden over several nights, which could mean 'your hedgehog' is a number of different individuals visiting at different times.​

From Jane and Peter - We were surprised to find our lawn dug up over several nights in November 2018.  We suspected the damage had been done by a Badger and so we set our camera trap.  Our suspicions were confirmed, and although it was interesting to see how diverse the wildlife is in our small semi-wild garden, but in this case I am glad to say it was a one off.

As some of you may, know Lynda spends the winter in Portugal and returns to us for the summer. This year, for obvious reasons, she was unable to get home so is spending a little longer than originally planned there. The video below shows several different species of wildlife captured on camera around her property.